Free and open to all

The Synergy of Visual Projections and Contemporary Dance

This is an experimental work with a handful of dancers engaging in possibility of a Synergy of Visual projections and contemporary dance improvisation.

The dancers explores various movements influenced by the visuals. The surprises pops up by placing the bodies in distant to the source of light and involvement of objects the block lights in sync with the motion.

The purpose of this work is to understand and analyse the various projection design with the movement patterns and discover simple movements turning into extraordinary by addition of 3D visuals and graphics.

The challenge to the dancer is that the visuals are set and framed and the dancer goes through a journey of creating the moves influenced by the patterns of the visual stimuli. The dancers use various elements like levels, distance, speed, etc towards the graphics.

The audience will travel in space with the visuals and dancers listening to varied music from electronic to Indian classical. 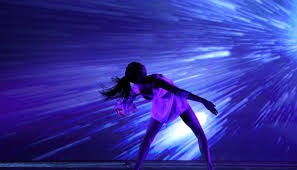 NOTES ON THE CHOREOGRAPHY

This work is a work-in-progress experimental movement work.
The visual effects, graphics and music is not original and have been contributed by various people, websites and links.

A choreography and performance by Satakshi Nandy

A piece of rope is tied from one end of the room to another. Something that binds and connects, can also cut the room into half. The rope aka this piece of mass, becomes the dancer’s absurd barrier, a companion, a distant connection to the concept of ‘home’, a rival with whom a constant fight reminds us of what an underdog goes through.

About the piece: “Mass is a work in progress, contemporary dance piece. It establishes a conflicting relationship between a person and a piece of object tied from one end of the room to the other. The main context of the piece is obstruction. The rope does not cater to having a mere literal function of itself being a piece of tensile rope that the dancer uses as a prop. Rather, it transcends into possessing a character of its own.  The equally significant character that provides said obstruction to the other protaginist in the piece, ie the dancer(we have 2 protagonists by now – the rope, the human). A significant reference of the work would lie in Ritwik Ghatak’s , ‘Ajantrik’. Ajantrik, internationally known as ‘ the Unmechanical’, or ‘The Pathetic Fallacy’  is a comedy-drama adapted from a short story, which traces the companionship between Bimal and his dearest taxi ‘jaggaddal’ against the landscape of an industrial wasteland in Bengal. Despite being broken down and outdated, Jaggaddal is Bimal’s closest companion. The film portrays an inmanimate object as a character in itself. The premise of ‘Mass’ lies within a dialectical relationship between the two characters – rope and human. The relationship reeks of dependency, rivalry, friendship, personal and political barriers.

‘Mass’ survives on a layer of subtle humour as much as it creates an environment of tension and struggle between an underdog and an undefined object. The communication between the two characters  can be looked on as a futile fight, an endearing yet hateful companionship, a form of constant negotiation or a lonely woman’s rant. The presence of the ‘other’ is stark and loud. And the protagonist’s need to cross a certain absurd barrier that is imagined yet manifesting from the reality of present circumstances is constant. Whether the underdog triumphs over the passive object, or there is an amicable equation finally, evolves towards the end. ”