Conference: The Duty Of Memories with Dr. Alain Londner 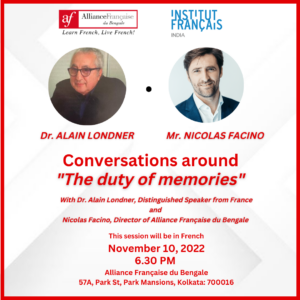 “The duty of memories” has become in a few decades a common reference to incite citizens to preserve and transmit the memory of those who lost their lives during the fighting of the armed conflicts of the 20th century, who were victims of the genocides committed by the Nazi perpetrators in Europe.
The duty to remember is also called upon to keep in mind the crimes against humanity and all the attacks on human dignity that have left deep scars in our societies.
For the past 30 years, Alain Londner has been tracing the footsteps of his grandparents who were victims of human cruelty, from Constantine in Algeria to the town of Burshtyn in Ukraine, to honor the “righteous” who saved his mother, his uncle, and his grandmother. A dental surgeon by profession, Dr. Londner has dedicated his life to his family, his profession, and his commitment to the duty of memories. He is regularly invited by associations and cultural organizations to share his experiences in Algeria, Poland, and Ukraine.
The speaker in conversation with Mr. Nicolas Facino on 10th November from 6:30 pm onwards at the auditorium of Alliance Française du Bengale will evoke the filial impulse that inspires him, the duty of memory necessary to build resilience in the face of history, and his future.
The session will be in French.
2022-11-10
Alliance Française Bengale

–Convergence photo exhibition is in Kolkata. The exhibition will be on display from 15th Nov at Indian Museum.

-Dr. Alain Londner will be in conversation with Mr.Nicolas Facino on the topic, ” Duty of Memories” on 10th November 2022.

-The French Virtuoso, Maxime Zecchini will be in conversation with Mr. Nicolas Facino on 11th November.