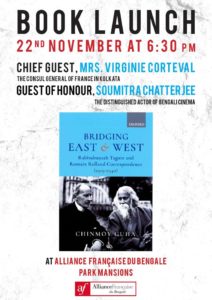 The book will be released by Mrs.Virginie Corteval, the Consul General of France in Kolkata and Mr.Soumitra Chatterjee, the celebrated actor of Bengali cinema.

The amazing inter-cultural correspondence (1919-1940) between two cultural icons of the twentieth century, Nobel laureates from the East and the West: the Indian poet Rabindranath Tagore (1861-1941) and the French novelist, playwright, and biographer, Romain Rolland (1866-1944), has remained undiscovered for far too long.

This work brings together, for the first time in English, these letters and telegrams that are among the finest exchanges of thought between the East and the West, and script the intellectual history of that period. It is also the story of a profound friendship, where Tagore and Rolland unlock their hearts to each other. The book also records the differences of opinion and misunderstandings between the two outstanding humanists of contemporary history, who often felt isolated in their own countries, on serious issues like Gandhi and Fascism. It comprises Rolland’s correspondence with the radical Saumyendranath Tagore, and the whole debate on the Tagore-Mussolini controversy.

This majestic and serene correspondence, comprising 46 letters and telegrams, along with three dialogues between the two at various times, as well as letters by Rathindranath Tagore and others, is a journey towards the imaging of a different world which would create the possibility of a new space outside cultural hegemony. Edited and annotated by one of India’s foremost French scholars, it is one of the most important quests for an alternative discourse in the last century.