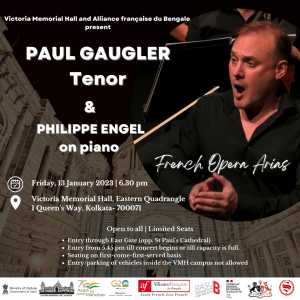 After studying at the Strasbourg Conservatory and graduating from the Paris National Superior Conservatory for Music and Dance, Paul Gaugler joined the Academies of Ambronay and Royaumont. Winner of Vincenzo Bellini and Armel Opera competitions, he made his debut as Duca di Mantova from Rigoletto (Pilsen Opera, Szeged National Theater). Paul Gaugler has also recorded for the cinema, the soundtrack of the film Ténor by Claude Zidi Jr., on-screen in 2022. Gaugler also frequently participates in humanitarian musical projects such as the Council of Europe,  CALMS- Les Voix solidaires, Artistes en Action, UNESCO, and many more.

Philippe Engel has been a musical advisor and audio producer in important theaters in Europe such as the Paris Opera House, the Opernhaus of Berlin, and Teatro Reale in Madrid, collaborating with conductors like Zubin Mehta or Valery Gergiev. He is the Head of the Music Department at The Neemrana Music Foundation since 2014.

Looking forward to your precious presence.