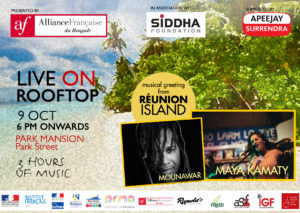 FREE AND OPEN TO ALL.

To celebrate the rich culture of Reunion Island, a French overseas territory, the French Institute in India is organizing <Musical Greeting from Réunion Island> with the support of the Alliance Française India network.On this occasion, Alliance Française du Bengale  in association with Siddha Foundation and Apeejay Group hosts the acclaimed reunion singer Maya Kamaty along with another musical heavyweight Mounawar for an enchanting performance of three hours at Park Mansion rooftop.

Born of a father-musician and a mother-story-teller, Maya Kamaty is the daughter of Gilbert Pounia, the lead singer of Ziskakan,one of the most famous maloya bands to emerge from Reunion. Her music is an amalgamation of traditional maloya instruments with modern influences, and is a mix of African rhythms, modern harmonies and a touch of the blues. She sings primarily in Creole, “a colourful language which has interesting rhythmic in the word…”

Mounawar has a rich and representative music of the Indian Ocean by the Afro rhythms. The root of his musical expression stems from his early childhood under the influence of Twarab and M’godro traditions, through which he has developed his singularity and sense of improvisation.  His poetic and meaningful lyrics revolts against the disrespect shown by men to each other and to their planet. The text of Mounawar carry a universalist message through an extraordinary contrast of power and tenderness.