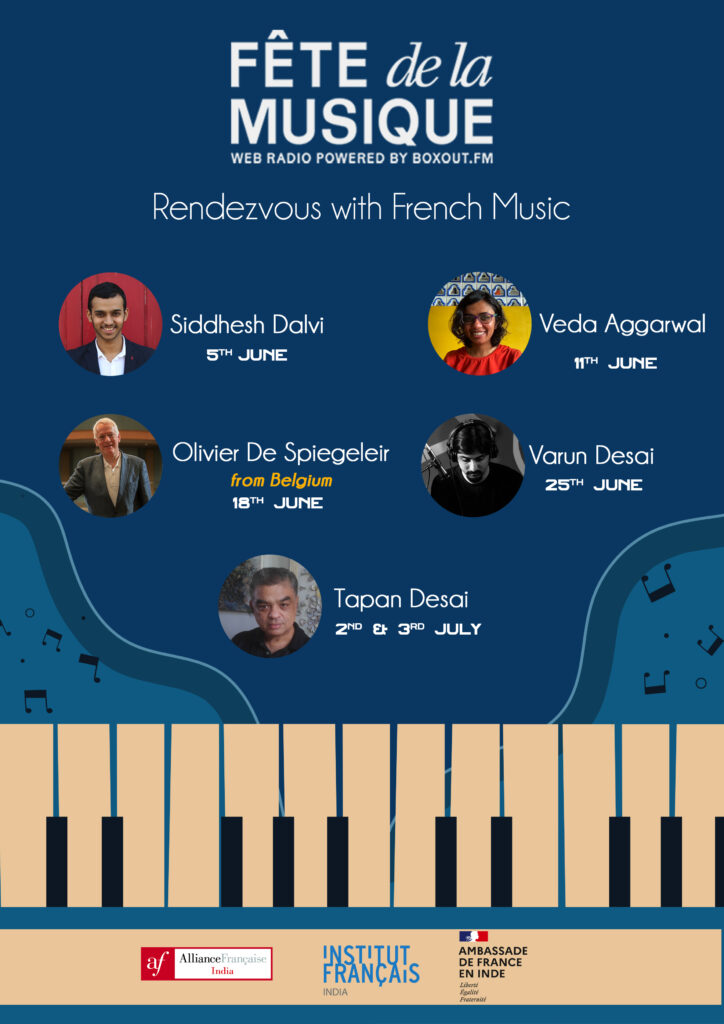 On the occasion of Fete de la Musique 2021, Alliance française du Bengale in association with Institute Français en Inde is organizing 6 WEBTALKS under the campaign RENDEZVOUS with French Music!, starting from 5th June, 2021. Each 45 minutes of session will see an expert delivering a talk on various genres of French Music, thus exploring the territories of their favourite subject. The talk will be followed by QnA which will allow the participants and attendees to interact with the speakers towards the end of each session.
The talks will be held via Zoom webinar for which prior registration is required. Register here : https://zoom.us/webinar/register/WN_PG5JpFtfQ_u8-H6e2VtlqA

NB. E-certificates to be provided on 100% attendance and active participation throughout the talks to the attendees.

Speakers and event details are as follows :
TALK 1 | 5 June | 5:00 PM IST
How I learn French by listening to classics? by Siddhesh Dalvi, FLE professor at Alliance française de Bombay
More on the topic: Siddhesh will talk about classic French artists (Piaf, Aznavour, Brassens, France Gall, Balavoine, Goldman) and how they helped him learn French, as a student. He will present some artists, some songs and shall speak about the pedagogical and cultural aspects of the same. Rest assured, it’ll be light and he will add in a few anecdotes, speak about their history and present a few songs!
About: Originally from Mumbai, Siddhesh is a French language teacher working in the french language domain for more than 3 years. He adores sharing his love for the french language with his students and aspires to create bridges between the french culture and the Indian culture through his passion, that is teaching!

TALK 2 | 11 June | 5:00 PM IST
Impressionism in music in the late 19th and early 20th centuries by Veda Aggarwal
About: Arts manager and festival curator, Veda moved to Kolkata in 2016 to run the Calcutta International Classical Guitar Festival and other affiliated projects including large-format public concerts, and setting up a holistic music education programme for children from disadvantaged communities. With the onset of the global pandemic, she found different ways to engage the music community across India, eventually producing a highly successful online edition of the guitar festival. Veda is passionate about bringing live performances to public spaces, using the platform of these venues to democratise art. To this end, she has joined a few other Calcuttans to found KultX, an organisation that acts as a catalyst for social and cultural improvements in the city.
TALK 3 | 18 June | 5:00 PM IST
Beethoven : 250 – Ode à la joie by Olivier de Spiegeleir (in FRENCH ONLY)
On the program: Ode to Joy, of course, and a choice of excerpts from famous Sonatas, Variations and Bagatelles. All set in context, commented on and presented by the artist himself, by illustrating the piano music with some beautiful pages of French poetry (spécialement Victor Hugo, grand admirateur de Beethoven)
About: Trained both at the Conservatory of Brussels and at the University of Louvain, Olivier De Spiegeleir is now famous for his intense career as a recitalist around the world. He makes his musical presence known through his concern for communicating quality feelings. First Prize « Dexia Classics », he has many recitals to his credit: Belgium, Europe, Canada, USA, Central America, South America, China, Russia. His repertoire ranges from Bach to Lutoslawski. He plays Beethoven’s complete set of 32 Sonatas, the complete set of Bagatelles and the 33 Diabelli Variations. “Commented piano recitals” : very few pianists speak to the public about the pieces they play. He also plays works by contemporary Belgian composers: Jacques Leduc, Frederik van Rossum, Jean-Marie Rens, Michel Fourgon, Patrice Merckx, Fabian Fiorini.
TALK 4 | 25 June | 5:00 PM IST
Musique concrète – A brief history of the emergence of Musique concrète in France, its proponents, important figures and influences by Varun Desai
About: Varun Desai is a computer engineer working in the field of music production and arts management. He’s been a teacher and lecturer for both hardware and software platforms as well as a graphic designer, creative coder, video artist and instrument maker. He is the founder of Synthfarm, an annual music and technology residency and is the director of the Kolkata Jazzfest.
TALK 5 | 2 & 3 July | 5:00 PM IST
French Gypsy Jazz by Tarun Desai
About: Tapan A. Desai (born in 1956) is a renowned engineer located in Calcutta. After he graduated from Birla Institute of Technology & Science, Pilani, Rajasthan, he worked first for Development Consultants Limited, then Aeicorp. He is now the Joint Managing Director of Gas Power Technologies. In parallel, since 1985, he teaches and writes papers about software development, operations research, system engineering, applying multimedia and the internet. As a music lover and player, Tapan A. Desai is also a member of several clubs and institutes all over the world, such as the Congo Square Music Society.
2021-06-05
Alliance Française Bengale