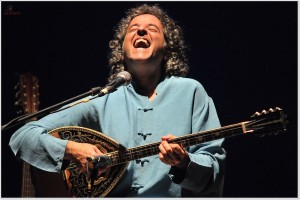 Abaji was born in Lebanon to an Armenian-Greek father from Smyrna and Armenian-Syrian mother born in Istanbul… they met each other in Lebanon, a country of exiles.

He arrived in France in 1976 shortly after the start of war and developed passion for the Chinese medicines: Tai Chi Chuan, Do-in and Dynamic relaxation. As a therapist, he practiced Tai Chi in a psychiatric community for seven years.

The music however had been a family tradition. ABAJI began playing the guitar at the age of 11, and soon picked up other instruments as well: the clarinet, percussions, the oud, the bouzouki and flutes collected during his travels. Later, the synthesis of these instruments combined with a variety of musical passions: Indian Music, Eastern and the blues. His guitar playing with a bow still creates sensation during festivals. 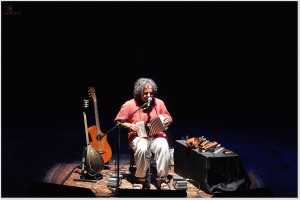 A meeting with the famous Gabriel Yared was a decisive moment in this famous composer’s life.

In 1996, he composed his first album « Paris-Beirut », singing in Arabic, French and English. Other releases followed: «Bedouin Blues », which features the song « Gibran ». This song was integrated in the famous record label Network Medien’s collection « Desert Blues 2». The third opus « Oriental Journey» received the Classic outstanding reference record label. This was followed by « Nomad Spirit », which featured three contemporary masters: Djivan Gasparyan with his Armenian duduk, Ramesh Shotham on South Indian percussion and Majid Bekkas on oud and guembri gnawa. The songs of both these albums were also on the sublime « Emociones », album combining the best of 25 years of the record label.

ABAJI composes and plays music for movies and television as well. Most recently, he produced music for a documentary feature film by Jean Deniau, “The Hostage Time,” broadcast in France in 2009.

The musical encounters lead ABAJI to the 5 continents: the Zulus of Durban, South Africa, the Indians of northern Mexico, the Gnawas of Morocco, the Qawwals of Lahore, Pakistan.

In 2009, this Lebanese of Paris, multi-instrumentist and singer, decided to produce his fifth album, recorded all the songs in one take and in 5 languages: French, Arabic, Greek, Turkish and Armenian. 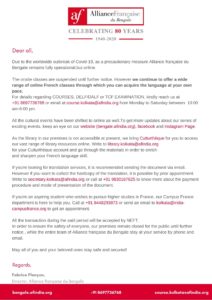