Photographic Exhibition: A Trip to France 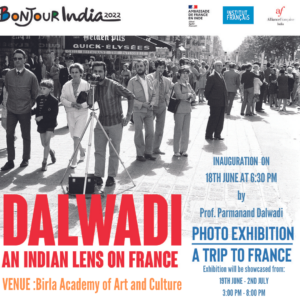 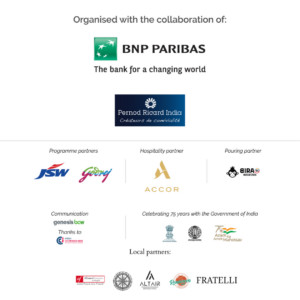 Date : 18th June 2022
Inauguration time : 6:30 PM
Venue : Birla Academy of Art and Culture.
Address: 108-109, Southern Avenue, Lake Terrace,
Kolkata: 700029
About the exhibition:
Prepare to time travel in France through an Indian look!
The year is 1970. You are in France looking at life in the era of disco and boogie. Long hair and moustaches adorn the heads of the men and la mode grips the spirits of the women. Fashion is in the air along with protests (it is France, after all) and life is beautiful. As they would say in France, “La vie est belle”. This exhibition will focus on Dalwadi’s journey to France in the 70’s tracing in 50 photos his journey to France captured with his Nikon F and the influence of Cartier-Bresson on his art.
He captured incongruous and unusual situations combining humor, tenderness and observations of French society which are described with short stories for each photo.
About Prof. Parmanand Dalwadi:
Prof. Parmanand Dalwadi, born in a craftsman family in Gujarat, graduated in Fine Arts from M.S.U. Baroda in 1963 and did his post graduation in Visual Communication from National Institute of Design, Ahmedabad in 1968.
He accompanied Mr.Henri Cartier-Bresson, the world renowned photo-journalist of on his journey to northern India in 1965. In return, Cartier-Bresson picked him and placed him in pictorial services, Paris to work with the legendary Pierre Gassmann with funding from the Ford Foundation.
He met his wife Radium in France and she can be seen in a few of his captured stills.
Parmanand was the President of Alliance Française d’Ahmedabad for a period of 6 years.
Join the inaugural ceremony of the exhibition in the presence of Professor Dalwadi on 18th June 2022 from 6:30 pm onwards at the Birla Academy of Art & Culture.
2022-06-14
Alliance Française Bengale